The DOC wine of the Vulture vines

History, characteristics and quality of the most famous grape of Southern Italy

Aglianico del Vultureis a DOC wine of the Aglianicogrape, whose production is permitted in the Vulture area, located north of the province of Potenza (Basilicata). With over 1500 hectares of land registered in the Register of vineyards and DOC wines, it is counted among the greatest red wines in Italy.

There are about forty companies in the sector in the Vulture area and annually produce about two and a half million bottles. The wine of Aglianico del Vulture is defined by some as “the Barolo of the South“, given various characteristics in common with the Piedmontese vine.

According to Article 3 of the Decree of the President of the Republic dated 18 February 1971, which confers the DOC brand on the vine, the municipalities interested in the production of Aglianico del Vulture are the following:

Aglianico del Vulture is obtained from the pure vinification of grapes belonging to the vine of the same name, which is found in the vineyards located at the foot of Monte Vulture, a volcano that has been extinct for millennia. In this area, Aglianico is grown up to 800 meters above sea level, but finds the most favorable conditions between 200 and 600 meters.

There are two terms to indicate the aging time: Vecchio, for a minimum of three years, and Riserva, for a minimum of five and its alcohol content ranges from 11.5 to 14 degrees. The yield of grapes into wine must not exceed 70%. 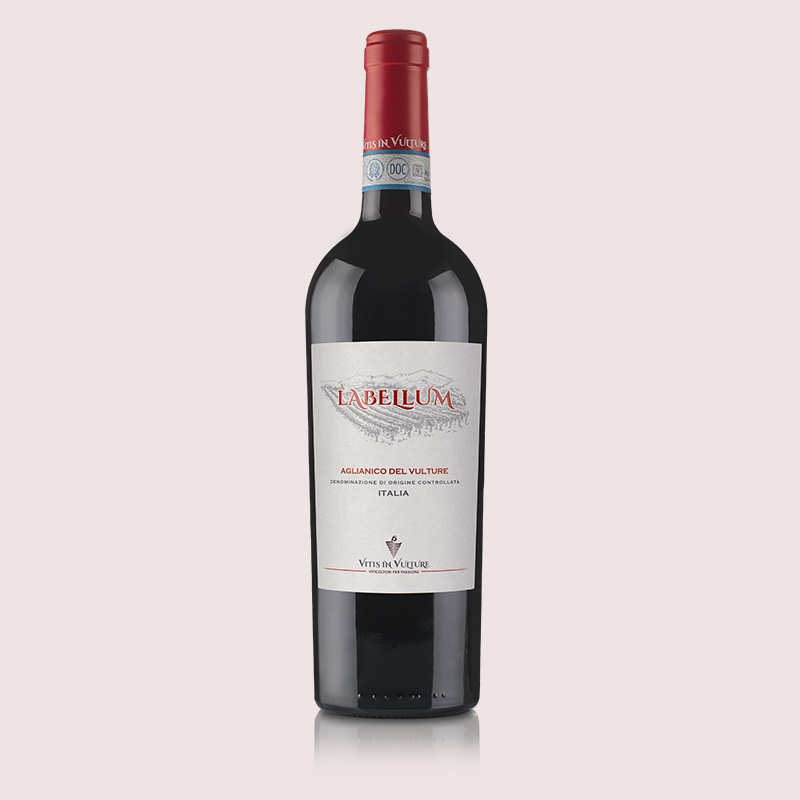 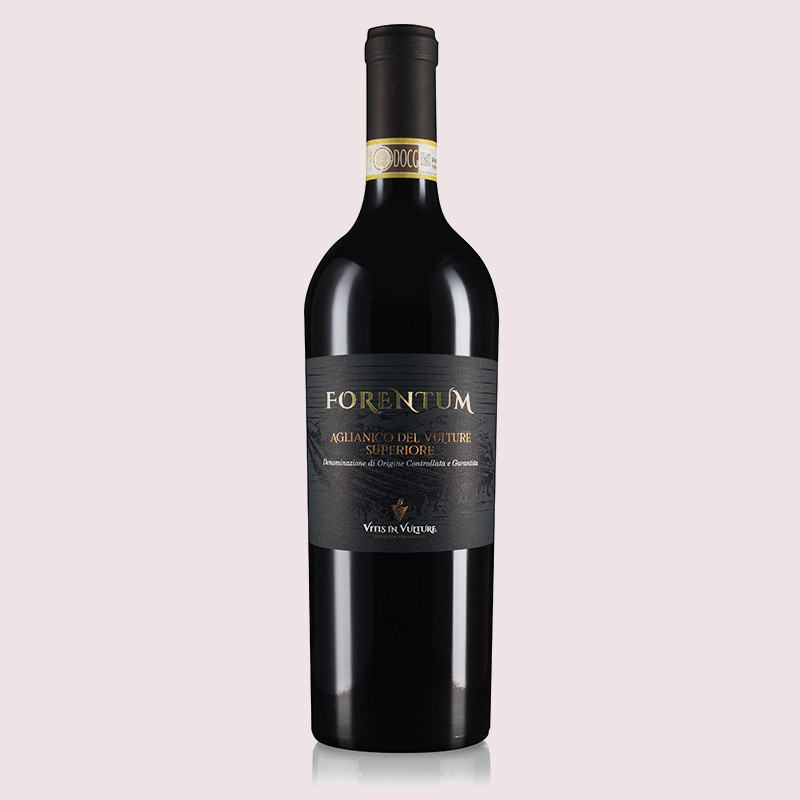 Aglianico del Vulture (like all the grape varieties belonging to Aglianico) has very remote origins and is believed to have been introduced by the Greeks in southern Italy between the 7th-6th century BC. Other historical sources that certify the antiquity of this vine are the remains of a Roman erawas found in the area of Rionero in Vulture and a bronze coin depicting the rural divinity of Dionysius, whose cult was later brought back to that di Bacchus, coined in the Venosa area in the 4th century BC

The origin of its name is uncertain, there are those who claim that it is inspired by the ancient city of Elea (Eleanico), on the Tyrrhenian coast of Lucania, and those who consider it a simple distortion of the word Hellenic. The ancient Romans then renamed it “Vitis Ellenica” and used it to produce Falerno wine. It is said that Hannibal, after defeating the Romans in 212 BC, would have sent his soldiers to the Vulture to treat themselves with the wines of the area.

One of the historical-literary testimonies on the history of this vine was left by Orazio, a Latin poet originally from Venosa who exalted the beauties of his land and the wine in question.

During the Swabian rule, Frederick II promoted the cultivation of the vine. In 1280 Charles I of Anjou, in view of a summer stay at Castel Lagopesole with the Angevin court, ordered the executioner of Basilicata to supply 400 bodies (equal to 185 liters) of native wine, which he called “Rubeo Melfie wine” . Furthermore, the Angevin ruler issued provisions for the protection of the royal vineyards and condemned the secret Costantino Caciole di Trani for having disinterested in the vineyards of Aglianico del Vulture di Melfi. The wines of the Melfese area, appreciated by the Swabian and Angevin rulers, were also requested and appreciated by the Florentine merchants of the time.

Subsequently there was a notable increase in viticulture, also linked to the new uses of wine, such as in the celebration of mass and in medicine, to the point of profoundly modifying the landscape of the countryside. In the 15th century the vineyards entirely occupied the slopes of Monte Vulture between Melfi, Rapolla and Barile. Sources from that period mention the “red wine of Melfi” (which according to Michele Carlucci must have been Aglianico). Cellars were often located in caves (in Melfi, an inventory of 1589 recorded 110). Even today the cellars of many important wineries are located in the old caves.

The original name (whether it was Helleanic or Hellenic) was changed to the current Aglianico during the Aragonese domination during the fifteenth century, due to the double ‘l’ pronounced ‘gl’ in Spanish phonetic usage.

In the nineteenth century, Aglianico del Vulture was in great demand by Neapolitan cellarmen to correct and enrich the wines of the province of Naples. Ten samples of Vulture wine also took part in the 1906Milan International Exposition. Pierre Viala and Victor Vermorel, the curators of Ampélographie. Traité général de viticulture, they dedicate a space to Aglianico in the famous Parisian ampelography treatise, in which an international team of 70 ampelographers had collaborated.

On 24 March 2012, the Italian Post Office issued stamps depicting the wines of 15 regions of Italy, one of which is dedicated to Aglianico del Vulture.